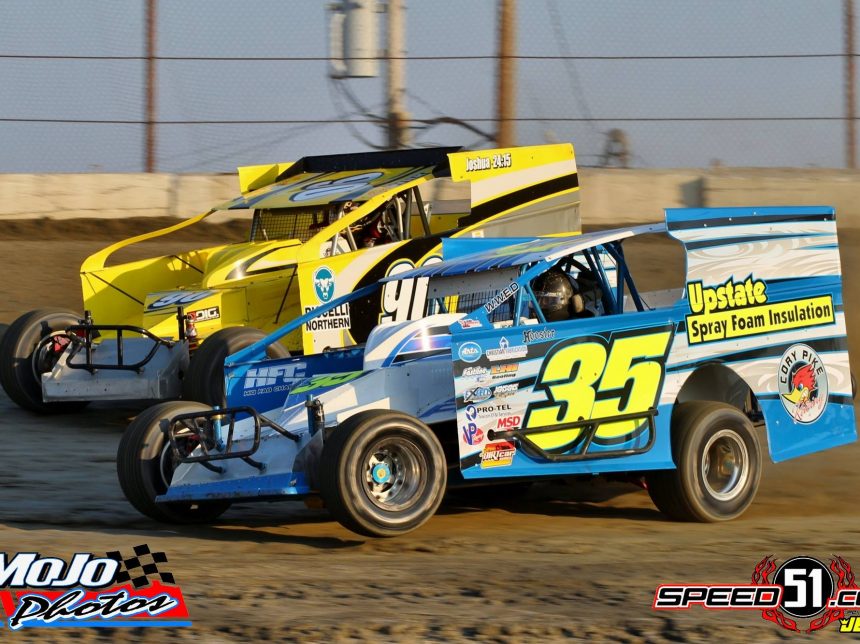 As the season nears its end the point battles are closer than ever and excitement on the track is at an all-time high. The racing at Thunder Mountain on Saturday proved this to be true both on and off the track.

Alan Barker churned out an exciting victory in the modified division – his first in 2017 at Thunder Mountain Speedway. He rode the high side of the speedway and took an impressive straight away lead which went unchallenged for the duration. This capped off a weekend sweep as he captured a victory Friday night at Afton Motorsports Park.

Rich Wagner survived some heavy pressure from Justin LaDue in the final five laps as LaDue made several attempts from all lanes to take the position in the 4cyl stocks. Wagner was up to the challenge and took the win.

In the crate sportsman division Daryl Krebs picked up his first victory of the season after the #20 car was unable to pass a post-race tech inspection.

After a rough 2017 on the mountain Kevin Jordan shook off the cobwebs and rode to victory in a dominating fashion over Eddie White, Brian White and Dan Allen in the open sportsman division.

The always exciting IMCAs put on a thrilling show as Mike Stoddard drove the high side to take home the victory. He was followed by Keith Lamphere and Bumps Scutt as they raced three and four wide throughout the 20-lap feature.
The patriot, Matt Spencer withstood early pressure from Don Russell and Earl Zimmer as well as a late race charge from Damon Decker to claim victory in the street stock division.
The 600 Xcel win went to Byron Worthing who took the lead from Shiner and never looked back.
A full weekend of racing awaits us this Saturday, September 2 and Sunday, September 3 as we hold the annual Wade Decker Memorial race. We hope you will join us for what is sure to be a memorable weekend.