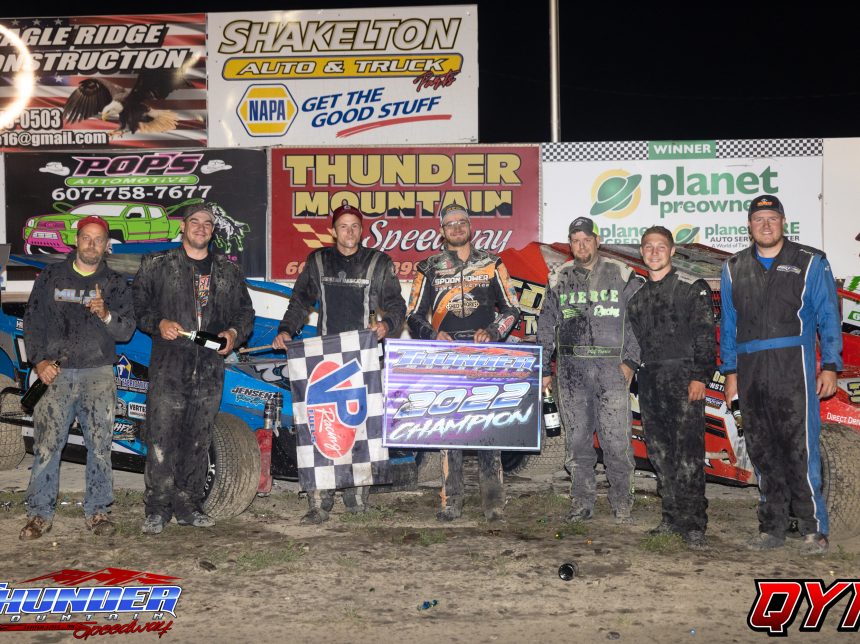 LISLE, NY – The 2022 racing season at Thunder Mountain Speedway ended on August 27th with a great crowd and great night of racing presented by Timberwolf Firewood Processing Equipment. Call Timberwolf at 607-307-4029, or visit them online at TimberwolfEquip.com for their full line-up of high performance machines as well as career opportunities. In the Dirt Track Digest TV Modifieds, Alan Barker locked up his second consecutive track championship after dominating the 30-lap feature event, giving Barker his fourth win on the season. In the DIRTcar 358 Modifieds, Rusty Smith prevailed for win two on the year while Shayne Spoonhower was crowned the 2022 champion in the class. Hunter Lapp hauled home his first ever DIRTcar Sportsman track championship with a trip to victory lane in their 25-lap main event. In a chaotic B-Walt’s Car Care 600cc Modified main, Doug Windhausen scored the victory, but Jake Waibel edged out Windhausen by two points for the championship. Nick Johnson claimed the victory in the Non-Winner’s event for the 600cc Modifieds. Jerry Lobdell Jr. racked up win eleven in a row to put the icing on his 2022 Wheeler’s Excavating Street Stock track championship. Buck Mills Jr. drove to the victory in the Pop’s Automotive Factory Stock feature and held off Jason Rhodes to take the track title. Trey Palmer got his first win of 2022 in the final Open vs Crate Sportsman feature, while Lucas Kastenhuber claimed his first championship.

Jeff Sheely and Landon Cummings led the Dirt Track Digest TV Modified to the green flag for their final feature of 2022. On the initial start, Jimmy Zacharias quickly worked around Cummings and Sheely to take the early race lead. By lap four, Alan Barker was already on the charge. Barker raced from sixth up to second as the field started lap five, putting pressure on Zacharias. It didn’t take long for Barker to make a move; he wrestled the lead away from Zacharias as the field completed lap six. As Barker streaked away from Zacharias, other drivers started to challenge for the second spot. Eric Leet was the first to step up, passing Zacharias on lap 17 to move into second. Darren Smith was on the charge after starting in 9th. He cleared Zacharias to take third before passing Leet for second on lap 24. No one had any challenge for Barker, who claimed back-to-back championships with a dominating win. Barker’s lead was over eight and a half seconds at the checkered flag. Darren Smith was second over Leet, Zacharias, and Rusty Smith.

Nick Nye took a nasty ride in the first Dirt Track Digest TV Modified heat race of the night. Nye was three-wide with Jason Andrews and Eric Leet when the three came together entering turn one. Nye got the worst of it, barrel rolling at least four times. Fortunately Nye was okay, but he was a scratch for the rest of the night.

Doug Smith and Rusty Smith led the DIRTcar 358 Modifieds to the green flag, but Doug Smith ended up sideways in turn one to bring out the yellow. Rusty Smith and Shayne Spoonhower led the field back to green, with Smith leading the way for the 25-lap distance. Spoonhower finished second, claiming the 2022 track championship. Lance Willix finished third, with Doug Smith and Connor Sellars completing the top five.

Dana Davis and Will Eastman led the DIRTcar Sportsman to the start of their feature finale, with Eastman getting the early jump to take the race lead. Hunter Lapp worked his way around Gordon Smith to move into third in the early stages. Lapp worked his way past Davis on lap 8 and started chasing down Eastman. Gordon Smith got past Davis to take third, but could only sit and watch as Eastman and Lapp pulled away. With five laps to go, Davis went around in turns three and four, collecting Timmy Borden Jr. and Dane Hedlund. Hedlund needed the hook while Borden and Davis continued. On the restart, Lapp bested Eastman to take the lead, the win, and the 2022 track championship. Eastman settled for second, with Cody Jackson, Smith, and Mike Austin completing the top five.

Sam Hubbard and James Randall led the B-Walt’s Car Care 600cc Modifieds to the green flag. Before the field completed lap one, a major pileup ended the race in three turns for seven cars, one of them being championship contender Chris Jordan. Jordan and Chelsie Beebe made contact in three and four while battling for spots inside the top five, sending the pair sideways in front of traffic. Many cars had nowhere to go, with Tyler Paige getting upside down and Anthony DeSimone ending up doing a nose-stand. All drivers were okay, but the accident eventually resulted in DNF’s for Dakota Anderson, Devon Green, DeSimone, Chad Mason, Paige, Jordan, and Chace Scutt.

On the restart, Randall pulled ahead of Hubbard to take the lead. Not soon after, Hubbard’s night ended as he came off the pace on the backstretch to cause a yellow. Randall held off TJ Smith on the restart to retain the lead. Quickly, the race came back under yellow after Ali Scutt got sideways, collecting championship contender Justin LaDue. LaDue continued, but Scutt’s night ended on the hook. Randall led the field back to the green flag, continuing to lead over Smith.  Windhausen passed Smith for second and raced Randall for the lead until an accident involving Bumps Scutt and Aiden Miller brought out the yellow flag, ending both of their nights. On the restart, Windhausen bested Randall and raced to the win, but Jake Waibel held on to third to take the 2022 championship. Donahue was second, with Waibel, Randall, and LaDue completing the top five.

Shane Moshier and Don Reeves led the Wheeler’s Excavating Street Stocks to the green flag. On the start, Moshier got sideways, collecting Brian Rhodes and Michael Morse. Everyone continued on after the small stack up. Trevor Dudley took the lead from Reeves on the restart, but he wouldn’t get much time to build a lead as a yellow flew for Lee Wagner. On the restart, Dudley faced a challenge from Jerry Lobdell Jr. and Mike Morse. The trio raced three wide through turns three and four until a pileup collected Don Russell, Bubba Peters, Mike Wilbur Jr., Shane Moshier, and Michael Morse. All cars drove away on their own power. On the restart, Dudley pulled away from Lobdell Jr. and Morse as they battled for second. Lobdell Jr. cleared Morse and started to run down Dudley. Dudley’s gap went away when Michael Morse hit a uke tire in turn two, bringing the yellow back out. On the restart, Lobdell Jr. cleared Dudley and drove to win 11 at Thunder Mountain and the track title. Dudley, Morse, Russell, and Rhodes completed the top five.

Dominik Albanese and Logan Eaton led the Pop’s Automotive Factory Stocks to the green flag, but the race was slowed early for two yellows involving Shannon Hollenbeck. On the second restart, Eaton led over Albanese until Caleb Clark hit a uke tire in turn four, bringing out another yellow. Albanese started to challenge Eaton for the lead on lap four, but he went around in turn two to bring the caution out once more. Dylan Eaton spun on the restart to keep the race under yellow. On the restart, Buck Mills Jr. battled around Eaton for the race lead. Just a moment earlier, Nick Stark spun in turn two. As Eaton tried to battle back, the no.9L went around to bring out the yellow again. On the restart, Mills Jr. held off the field to take the win and the track title. Albanese battled back to second, with Jason Rhodes, Rich Sharpsteen, and Logan Eaton completing the field.

Lucas Kastenhuber and Jonathan Fowlston led the Open vs Crate Sportsman to the final green flag of 2022. Trey Palmer charged through the field past Fowlston to take the lead and never looked back, taking his first win of 2022 in the final feature event. Fowlston finished second, with Blake Sapriacone, Alan Komar, and Lucas Kastenhuber completing the top five. Kastenhuber was crowned the 2022 track champion.

Thank you all for your support in 2022! We’ll see you next year on the Mountain!