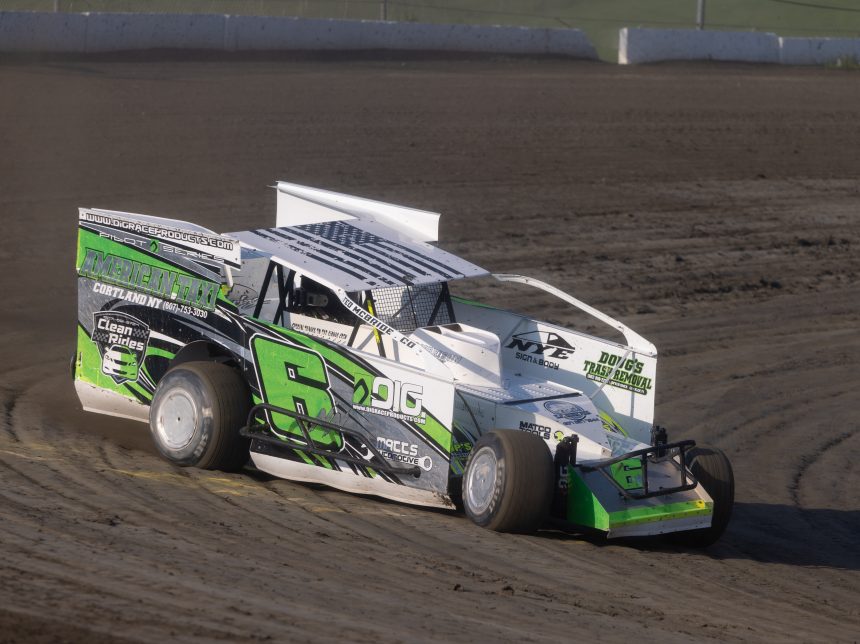 LISLE, NY – The 30th Anniversary Celebration presented by Contento’s and Forkey Fabrication provided lots of action on and off the track. A 2023 season pass and $50 gift certificates for DIRTcar merchandise were raffled off, in addition to a whole host of free hats and apparel courtesy of Hoosier Racing Tires and Timberwolf Firewood Processing. On the track, Nick Nye added some spice to a six-car Dirt Track Digest TV Modified points hunt by taking his second win of the season. In DIRTcar 358 Modified action, the ‘Franklin Flyer’ Billy Decker held off Lance Willix after the two dueled back and forth for the lead for the entire 25-lap distance. Hunter Lapp battled with Alan Fink as the two worked through lap traffic, with Lapp besting Fink to take his second win of the year. Tom Donahue worked his way through the field to pass Tracy Oliver late to take another B-Walt’s Car Care 600cc Modified win. Jerry Lobdell Jr. continued his dominance of the Wheeler’s Excavating Street Stocks after holding off Trever Dudley on a late-race restart. Lanson Albanese survived a chaotic Pop’s Automotive Factory Stock race to take a commanding race win over Jason Rhodes. Jeremy Hamilton used a restart to pass Ray Leonard and return to Open vs Crate Sportsman victory lane.

Jeff Sheely and Nick Nye led the Dirt Track Digest TV Modified feature to the green flag. Nye pulled out to a small advantage over Sheely, but a slew of early yellows slowed the pace. Landon Cummings ended up sideways in turn one to bring out the first and second caution, with apparent car troubles sending the No.13 pitside for the night. As the field took the green flag for the second restart on lap two, Jimmy Zacharias challenged Nye for the lead. Zacharias lurked low while Nye rode the high side of the speedway for dozens of laps. As the field clicked off halfway, Nye found some more speed and started to pull away from Zacharias. As the top two raced for the lead, spots three through six were all up for grabs. Eric Leet and Alan Barker battled side by side for third, with Barker eventually going to the topside to clear Leet for the position. Leet settled in the fourth while everyone behind him brawled for fifth. Darren Smith and Matt Meade went sail-to-sail in the late stages of the race, eventually allowing Rusty Smith to creep into the battle as the laps wound down. Nye took the checkered flag for the second time in 2022 and claimed 60 valuable points. Zacharias, Barker, Leet, and Darren Smith completed the top five, with Smith getting back around Meade when his No.28 came off the pace on the final lap.

Tom Eiklor and Billy Decker brought the DIRTcar 358 Modifieds to the green flag. Eiklor and Decker raced side-by-side into turn one, with Decker using the top to clear Eiklor for the lead. A quick yellow flew on lap 2 after contact between Connor Sellars and Shayne Spoonhower sent Spoonhower around. On the restart, Lance Willix moved into second and quickly put pressure on Decker for the lead. Decker danced on the cushion while Willix worked the bottom for the rest of the 25-lap distance. Willix and Decker pulled to even terms multiple times, but Decker would always just nip Willix for the lead at the line. As the race moved on, Decker creeped down the race track just enough to compromise Willix’s line on entry. Willix was never further than a car length from Decker, but he couldn’t make a move stick as Decker claimed a popular win. Willix finished second, and Spoonhower rebounded from his spin to take third. Connor Sellars and Doug Smith completed the top five.

Jamie Kamrowski and Gordon Smith led the DIRTcar Sportsman to the green flag for their 25-lap feature. Smith prevailed to take the race lead off of turn two while the top two championship contenders worked through the field. Alan Fink started fifth and quickly got past Dana Davis and Cody Jackson to move into third before getting around Kamrowski for second. Hunter Lapp followed Fink through from the seventh place starting spot to eventually take third. Fink ran down Smith and got the move for the lead completed by lap ten. Lapp wasted no time and hustled to get by Smith. The top two started to pull away from Smith, who had a comfortable lead to the rest of the field. Lapp started to close the gap on Fink as lap traffic became a factory. Lapp found a gap on the bottom to get under Fink, and passed Fink for the lead with a handful of laps to go to take the lead and the win. Fink held second over Will Eastman, who got by Gordon Smith at the very end to take third. Dana Davis completed the top five,

Tracy Oliver and Jake Waibel led a 23-car field of B-Walt’s Car Care 600cc Modifieds to the green flag. On the original start, a major pileup took out championship leader Chris Jordan and Logan LaDue. Jordan ended up sideways in front of the field, with LaDue taking evasive action that sent him head on into the frontstretch wall. Ajay Tuttle had nowhere to go and tagged Jordan, ripping the front end out of the No.17a and ending the night for Jordan. Tuttle continued while Jordan and LaDue needed to be towed off the speedway. After a few failed restarts, Oliver jumped out to the lead once the race got underway. Bumps Scutt bested Waibel to move into second as the field sliced and diced their way around the speedway. Donahue was quickly making his way up through the field from his ninth place starting spot. Donahue quickly found himself in third after passing Jake Waibel and Ali Scutt with a chance to get by Bumps Scutt and Oliver. Donahue chose the top-side to make the pass and it paid dividends for Donahue. Donahue cleared Oliver for the lead with less than five laps to go until a yellow flew for Sam Hubbard, who had a broken front end. On the restart Donahue pulled back clear of Oliver to take the win. Oliver, Scutt, Waibel, and Jared Green completed the top five.

Mike and Michael Morse brought the Wheeler’s Excavating Street Stocks to the green flag. On the start, Jerry Lobdell Jr. wasted no time and moved up from fifth to second by the end of lap one. Lobdell Jr. got around the elder Morse to take the race lead on lap two. Trever Dudley then moved into second ahead of Morse and tried to challenge for the race lead. Dudley got right up to the rear bumper of Lobdell Jr. but was unable to make a move. A late race yellow stacked the field up for a one lap dash. Despite his lead vanishing, Lobdell Jr. fired off well on the restart and cruised to yet another Street Stock win at Thunder Mountain. Dudley, Morse, Mike Wilbur Jr., and Brian Rhodes completed the top five.

Mitch Quail Jr. and Dominik Albanese led a 16 car Pop’s Automotive Factory Stock field to the green flag. Quail Jr. got sideways going into turn one and ended up spinning out without collecting any major damage to bring out the first yellow. Albanese led the field back to green, but it was Bob Mills getting around the younger Albanese to take the lead. Mills’ lead would not last for long though, as his No.24 machine suddenly broke in turn one. Albanese, Jason Rhodes, and Buck Mills Jr. were all collected in the melee. All were able to drive away except for Bob Mills. The race was slowed by multiple yellows for single car spins or small fender benders that cycled many drivers through the field. By the end of it all, Lanson Albanese had kept his nose clean and was leading the way. When the race restarted, Albanese showed speed on the top side and pulled away from Jason Rhodes and Buck Mills Jr. Mills Jr., hustling to rejoin the race under one of the yellow flags, launched off the turn two ramp and caught several feet of air before slamming back down onto the racing surface. As the top three hustled the high lane away from the pack, Kenny Hunt and Jerry Fassett Jr. went door-to-door battling for fifth behind Logan Eaton. The elder Albanese took the checkers, with Rhodes, Mills Jr., Eaton, and Hunt completing the top five.

Ray Leonard and Jeremy Hamilton led the Open vs Crate Sportsman to the green flag. Leonard led early while Hamilton filed in line. A quick yellow flew after Lucas Kastenhuber ended up facing the wrong way. A quick restart resulted in another yellow flag to bunch the field together. The third time was the charm for Hamilton, who got a great run into turn one and took the lead using the top side. Hamilton held on the rest of the way to take the win. Leonard, Greg Morgan, Blake Sarpriacone, and Jonathan Fowlston completed the top five.

Mike Houghtaling won the Dirt Modified Nostalgia Tour event after a race long battle with George Valenti. It felt just like 1992 at Thunder Mountain, as the boxy-bodied Bicknell of Houghtaling and Valenti’s Troyer Mud Bus battled tooth and nail for the lead. Behind them, Bill Leonard held off Matt Barbour, John West, and Joe August Jr. in a great race in the mid-pack. Houghtaling, a former racer in New York, recently moved to Virginia and made the drive up to Thunder Mountain to join the tour for this event.\

Be with us next Wednesday for our DIRTcar 358 Modified Tour Southern Tier Spectacular! The DIRTcar Crate Sportsman Tour will join the card alongside the B-Walt’s Car Care 600cc Modifieds. Tickets will be $25 for adults, $20 for students/seniors/veterans, and kids 9 and under will be FREE!