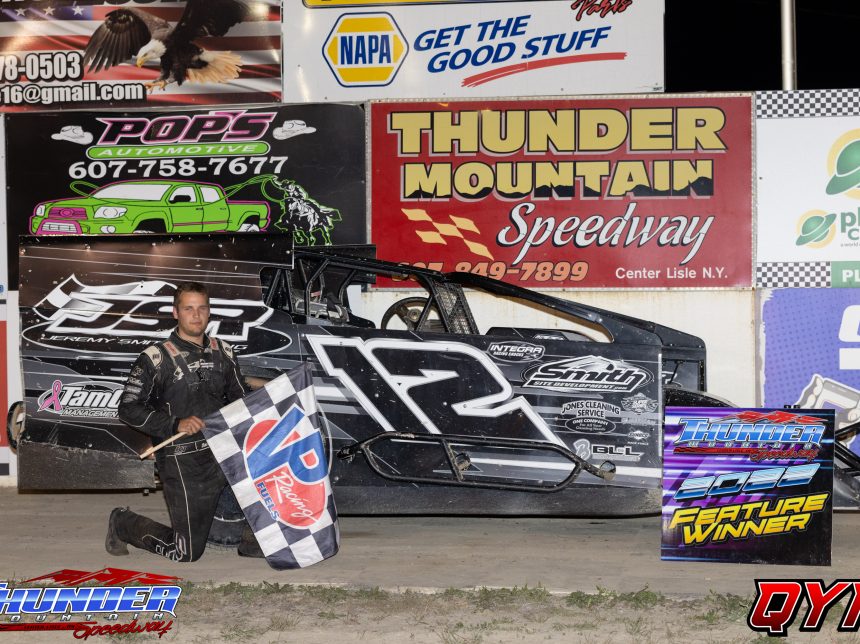 Jeff Sheely and Garrett Rushlow brought the Dirt Track Digest TV Modifieds to the green flag for their 30 lap feature. Rushlow jumped out to the early race lead while Sheely held on to second. On lap two of the main event, Sheely ended up sideways in front of the field. At the same time, Jimmy Zacharias ended up sideways as the pack bunched up heading into turn one. Bailey Boyd tagged Sheely, ending up sideways in front of Eric Leet, who got caught up in the Zacharias incident and had nowhere to go with Boyd’s car parked lengthwise across the track. The two made heavy contact, ending the night for both drivers. Jason Andrews’ night would end after sustaining front-end damage in the Zacharias incident in turn one. Sheely also went off on the hook to end his night. On the restart, Rushlow continued to show the way with Rusty Smith riding in second. However, Darren Smith found some life on the restart, charging his way up through the field and getting around Rusty Smith for second as the field started to spread out. Alan Barker was also on the move, as he charged from twelfth to fifth by the time the field clicked off lap 15. Barker quickly maneuvered around Rusty Smith and then Rushlow to move up into second. Barker tried every line he could, but Smith was just too strong on the topside. Smith strutted away on a late-race restart to take his second win of the year. Barker held on to second, followed by Rushlow bringing home his first top three of the year. Rusty Smith took fourth, while Matt Meade impressed in his return to racing with a fifth place finish to complete the top five.

Lance Willix and Connor Sellars brought the DIRTcar 358 Modifieds to the green flag. On the start, Willix jumped out to strong lead. Rusty Smith got around Sellars to take second, but that battle was far from over. Smith and Sellars faced pressure from Shayne Spoonhower, Jordan McCreadie, and Billy Decker. Just before halfway, Sellars got back around Smith to take second back over. Spoonhower and McCreadie ran side-by-side in a race long battle for fourth with Decker waiting for his opportunity a few carlengths back. McCreadie’s night ended in turns three and four when his No.28 machine came off the pace with a mechanical problem with two laps to go. On the restart, Willix went on to take his second win of the year. Sellars and Smith completed the top three. Spoonhower just held off Decker to take fourth with Decker completing the top five.

Cody Jackson and Jamie Kamrowski brought the DIRTcar Sportsman field to the green flag. Jackson quickly opened up a half-straightaway race lead while Kamrowski, Mike Austin, Alan Fink, and Hunter Lapp battled for spots two through five. Austin, Fink, and Lapp worked up to second, third, and fourth respectively while Kamrowski pulled to the infield with problems on the No.284. Jackson continued to stretch his lead until a yellow flew with 9 laps to go for Dana Davis in turn one. On the restart, Jackson once again extended his lead to take the win. Fink and Lapp got around Austin with a lap to go to finish second and third with Austin taking fourth. Will Eastman completed the top five.

Justin LaDue and Tom Donahue led the B-Walt’s Car Care 600cc Modifieds to the green flag. It quickly became clear that it was going to be a 20-lap slugfest between LaDue and Donahue. The pair traded the lead multiple times, with Donahue working the high line and LaDue racing down low. The pair’s battle was halted by a slew of mid-race cautions, most notably for a incident in turn four that sent Samuel Hubbard hard into the frontstretch wall on lap 13, ending his night. On the restart, Donahue was officially the race leader but had LaDue right up on his left door. Chris Jordan entered the battle, taking a few looks underneath the pair in the three spot. Donahue held on to take his second win of the year and first Saturday night win. LaDue, Jordan, Devon Green, and Jake Waibel completed the top five.

Mike Morse and Lanson Albanese brought the Wheeler’s Excavating Street Stocks to the green flag. Albanese led the way early, but Lobdell Jr. worked his way around Albanese to take the lead. A yellow flag for a sideways Michael Morse bunched Lobdell Jr and Albanese back together, but Albanese ended up battling with Don Russell for second while Lobdell Jr. drove to another victory. Russell, Mike Morse, Albanese, and Shane Moshier completed the top five.

Dominik Albanese and Jason Rhodes brought the Pop’s Automotive Factory Stocks to the green flag. Albanese and Rhodes went side by side into turn three, but Rhodes prevailed to take the lead. Buck Mills Jr and Bob Mills worked around Albanese and started battling with Rhodes for the top spot. Rhodes was able to pull back away as the Mills battled for second, with Rhodes taking his second win of the season at Thunder Mountain. Buck Mills Jr., Bob Mills, Dominik Albanese, and Luke Mills rounded out the top five.

Lucas Kastenhuber and Jeremy Hamilton led the Open vs Crate Sportsman to the green flag. Hamilton led the way earlier, but had his lead cut to zero after a slew of mid-race yellow flags for a variety of incidents. After the race restarted, Hamilton got into a battle with Ray Leonard for the race lead. With two laps to go, Hamilton made a last-ditch effort to re-take the lead, ending with his No.42 sideways in turn four. On the restart, Leonard held off Blake Sapriacone to take the checkered flag. Tres Palmer, Dave Rosa, and Alan Komar completed the top five.

Join us next Saturday, July 16th for our Fan Appreciation Night! We will have our drivers on the frontstretch signing autographs and ready to meet with our great fans!