CLIMBING THE MOUNTAIN with: Jimmy Zacharias 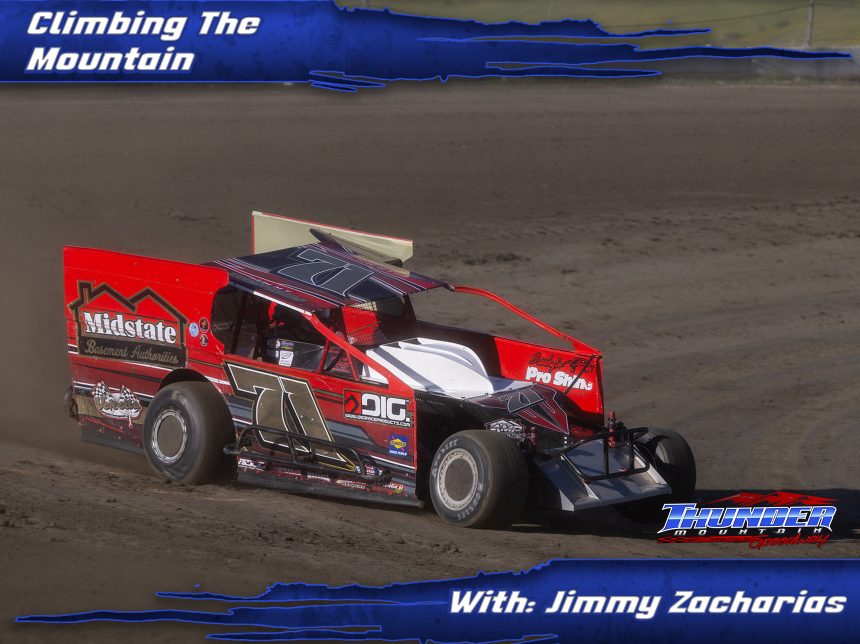 LISLE, NY- Welcome to the second installment of Climbing The Mountain, where we learn about the men and women behind the wheel every week at the Thunder Mountain Speedway. Today, we get to know Jimmy Zacharias, a driver who has plenty of Modified experience on asphalt and dirt.

The Zacharias family needs no introduction. Generations of Zacharias’ have raced and found success. Jimmy Zacharias was destined to have a racing career.

“We were all born into racing”, said Zacharias. “I started racing when I was five years old in a microd. I ran those for a bit, then I moved into a four-cylinder on asphalt when I turned 11. I ran for there for a few years, then we went pavement modified racing. We ran some sportsman races on dirt in 2017 before we went dirt racing full time in 2018. We won the Thunder Mountain Speedway sportsman championship that year.”

After Zacharias claimed the sportsman track title in 2018, he continued his evolving dirt career at Thunder Mountain by moving into the Dirt Track Digest TV Modified division.

“You can’t beat the racing at Thunder Mountain”, said Zacharias. “We’re home early every night, and it’s close to home for us. It’s a good night for us at the race track if we move forward in the race and load the car up in one piece.”

Zacharias’ continues to write the dirt chapter of his career at Thunder Mountain. With the Wade Decker Memorial coming up in just a few short weeks, Zacharias would love to bring home another $5,000 payday against the best in the Southern Tier.

“Winning the Wade Decker Memorial last year was the biggest win for us on dirt so far”, said Zacharias. “We hope to finish out the year strong here and get the Modified track championship. We also want to venture out to some Super DIRTcar Series races and get better on the tour.”

Racing is a large part of life for the Zacharias family, and that tradition continues with Zacharias’ kids. However, the young ones might expand the Zacharias racing legacy beyond the ovals and into the woods and hills.

“I stay at home with the family and work a normal job during the week”, said Zacharias. “We go four-wheeler racing with the kids and the family.”

Zacharias has two career victories in the Dirt Track Digest TV Modified division at the Thunder Mountain Speedway. The first came during a weekly event on June 5th, 2021, while the second came 4 months later in the 9th Annual Wade Decker Memorial on September 5th, 2021. Zacharias has 12 top fives and 22 top tens across 28 career starts at the Thunder Mountain Speedway. He has also won a Modified race at the Penn-Can Speedway.

Stay up-to-date on all of the latest results, news, and more from Thunder Mountain Speedway by liking our Facebook page and following us on Instagram and Twitter. You can find us on the web at thundermtnspeedway.com.