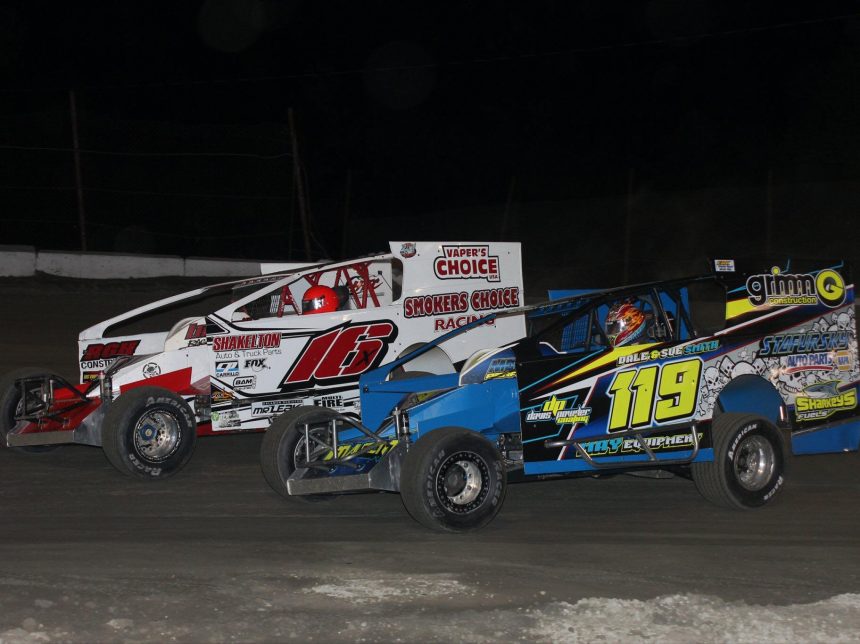 Center Lisle, NY – The only thing hotter than the summer day in Center Lisle, N.Y. Saturday was the racing action on the track! The hillside grandstands were full of people and the pits were over flowing with 137 cars competing in the racing action. The fans came in droves for sunburns and racing excitement and that is just what they got!

The first two features of the night saw brand new faces in victory lane. The 600 cc mods had a three-car breakaway through lap traffic that provided a terrific battle to the finish as Dana Davis made his first stop in Thunder Mountain’s victory lane holding off a close running Chris Jordan in the Leigh family car 17a. Davis was excited to get his first win amongst the stiff competition and said he knew Jordan was right there while talking to the fans in his victory lane interview.

The spacious 3/8 clay oval provides an excellent opportunity for the street stocks to show case their talents and Saturday night was no different. This time “Mr. 2nd”, Lanson Albanese, was not 2nd. The driver of the war wagon has been pulling runner up finishes all year, always nipping on the heels of the winner.  Saturday night he was not going to be denied as he guided the 14a to the front and would never relinquish the lead. While Albanese was in control, the full fendered boys were up to their old three wide antics as Matt Spencer and Damon Decker were side by side for the majority of the event. Trevor Dudley was peeking his nose underneath both of them. As always, they had the fans on their feet for a runner up battle that lasted to the last corner with Albanese in for the win it was Afton N.Y. senior Damon Decker getting 2nd followed by Dudley and Spencer.

When the mighty modifieds took center stage of the super racing surface all eyes were on the high-flying 35 as Alan Barker roared to the lead in Cory Pike’s potent big block. After the crowd adjusted their attention through the field, they noticed that the short track surgeon himself was setting up for big moves. Current hot shoe on the mountain Wurtsboro, N.Y. Dan Creeden was making his charge from his 12th starting position. Creeden had just entered the top five on lap 12 and had his sights on second-generation racer Byron Worthing for fourth. As leader, Barker was slicing through lap traffic and appeared to be on his way to victory but as Creeden broke into the runner up spot after a good battle with legendary racer Barry White the surgeon had his sights set on the 35 car. Just after the halfway point, entering turn one, a lap car broke the momentum of Barker making him lift on his potent big block and that was just enough to hinder his corner entry and let Creeden strike in his famous inches from the uke tire line around the speedway. Once out front Creeden was too much to handle and powered away. Barker keep him in his sights to record a great effort for his Corey Pike big block. Barry White finished a season best third place with a great performance in his Deka batteries 131. Followed by the ever consistent 6nn of the “the race car guy” Nick Nye and rounding out the top five was Byron Worthing. In victory lane, Creeden expressed his love for the ultra-racy speedway and the hard work that the Spoonhowers put fourth every week. He also did the unthinkable for a racer, which gained him a loud cheer from the crowd, he admitted that the summer temp got a little hot for him last week as he apologized for getting worked up and exchanging words with Barker’s crew and praised them for their fast pace this week.

The open sportsman race was a white show, no pun intended, the father son duo have figured out Thunder Mountain Speedway to perfection. As Brian started the event from the front row most were giving up on the show but father and previous season winner Fast Eddie was not going out without a fight. As Brian stayed at the point and clicked off laps, his father was putting on a show from deep in the field. By the race mid-point Eddie had a bunch of the sportsman’s heavy hitters right in front of him while Brian was in clean air out front. Eddie made a lap 17 pass of Chance Spoonhower to secure the third spot as he reeled in the front running duo of Brian and Eric Leet he saw the lap counter turn to twenty and time expired to catch them. Brian was victorious with Leet in for the runner up spot and Eddie turning in the drive of the race for third.

Other winners included Kenny Hammond in the crates. Kenny Underwood in the 4cyl class and Will Ward in IMCA. Racing gets underway again next Saturday night be sure to be on the mountain early as A-Verdi Storage Containers proudly presents Fan Appreciation Night at The Fast Track!