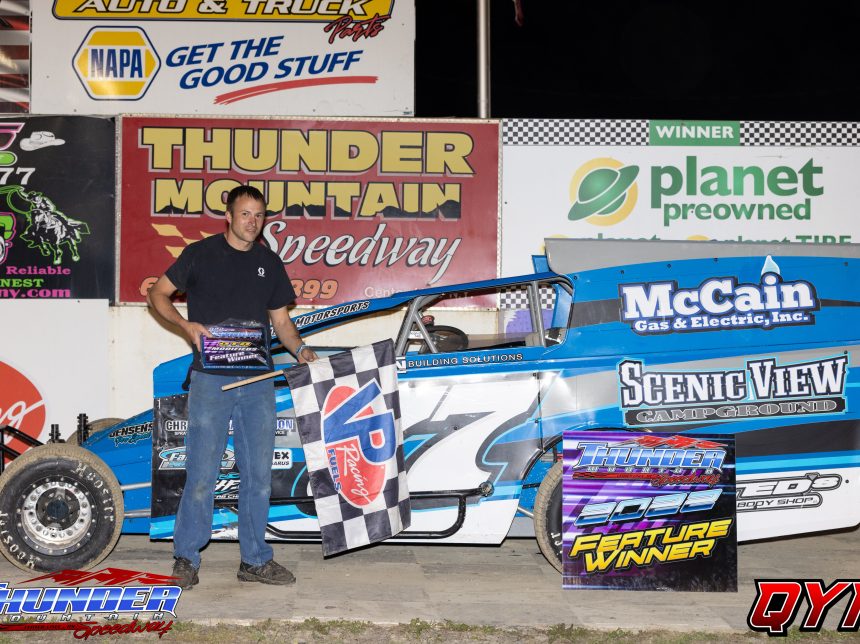 Jeff Sheely and Landon Cummings led the Dirt Track Digest TV Modifieds to the green flag. Sheely led the field through turns one and two, but Cummings threw a slider on Sheely to take the race lead. Bailey Boyd slotted into third place after lap one while Rusty Smith, Alan Barker, and Jimmy Zacharias were locked in a three-wide battle for fourth. Boyd got past Sheely for second on lap four, and Barker got past Sheely for third a lap later. Barker quickly caught and passed Boyd for second on lap eight, with Zacharias following Barker through in turns one and two. Less than a lap after Barker grabbed second, Barker passed Landon Cummings on the bottom to take the race lead for good. Rusty Smith brought out the first yellow flag after he came off the pace with a broken right rear shock. Barker jumped back out front on the restart, with Zacharias and Boyd holding on to second and third. Ryan Jordan came up through the field to get around Cummings for fourth, with Darren Smith and Nick Nye battling for sixth behind Cummings. Cummings ended up facing the wrong way in turn one to bring out the second and final caution of the race as Jason Andrews slid to a stop just in front of Cummings. Barker ran away on the final restart to claim victory. Zacharias held on to second while Jordan, Darren Smith, and Nick Nye got past Bailey Boyd in the closing laps to complete the top five.

Eric Winsor and Dane Hedlund led the DIRTcar Sportsman field to the green flag. Hedlund jumped out to the early race lead ahead of Gordon Smith, who got past Bobby Heintz and Winsor to move into second. Cody Jackson found a uke tire on lap four, bringing out the first caution of the night. Jackson was able to continue. Hedlund and Smith brought the field to a short-lived green flag. Jamie Kamrowski and Heintz locked bumpers in the mad scramble through turns one and two, collecting Winsor as they slid up to the wall on the exit of turn number two. Hedlund ended up sideways in turn three after the yellow flag, and was able to reclaim his spot up front. Everyone involved was able to continue. Hedlund and Smith brought the field to green one more time. This time, Smith got around Hedlund on the top side and took the race lead on lap five. Smith immediately faced pressure from Mike Austin and Hunter Lapp, who moved up through the field to second and third. Austin looked high and Lapp looked low, but neither could find their way around Smith. Austin’s race ended on lap 13, as a plume of white smoke exploded out of the back of the No.9 machine, sending Austin pitside. Smith and Lapp battled tooth and nail for the race win. Lapp had an opportunity through turns three and four on the final lap, but Smith held on to claim victory. Lapp, Hedlund, Will Eastman, and Alan Fink completed the top five.

Nick Johnson and Zack Mills brought a 22-car B-Walt’s Car Care 600cc Modified field to the green flag. Mills took the race lead from Johnson into turns one and two, with TJ Smith powering around Johnson to take second down the backstretch. The top three stretched away from the field while Justin LaDue, Jake Waibel and Tracy Oliver battled for fourth. As the field completed lap five, Samuel Hubbard broke on the top-side of turns three and four to bring out the yellow flag. As the field came to the first attempt at a restart, the outside line stacked up, sending Chelsie Beebe sideways in the path of Aiden Miller, with the two making contact and sliding to the topside of turn three. Miller drove away, but Beebe’s night ended with rear end damage to the No.17c. On the second attempt, Nick Johnson ended up sideways in front of Devon Green and Dakota Anderson who all made hard contact with Johnson. All three continued with various levels of cosmetic/mechanical damage. A single-file restart was called for, and the field got away cleanly. Mills pulled a few car lengths on TJ Smith, who was busy trying to hold off a hard-charging Jake Waibel. Waibel looked high and low, but could not get around Smith. The pair caught up to Mills with five laps to go. Smith and Waibel did everything they could to try and pass Mills in lap traffic, but the No.215 stayed out front and Mills bagged his first career win. Smith, Waibel, Oliver, and Bumps Scutt completed the top five.

Bob Mills and Frank Mills Jr. brought the Pop’s Automotive Factory Stocks to the green flag. Bob Mills jumped out front early with nephew Buck Mills Jr. and Jason Rhodes getting around ‘Fast Frank’ to challenge for the lead. Buck Mills Jr. worked the bottom while Bob Mills worked the topside in a battle for the top spot. The yellow flag flew at halfway as Frank Mills Jr. spun sideways on the frontstretch. The yellow flag flew again with three laps to go for Alecia Towner, who came to a stop in turns three and four behind the while of the Lanson Albanese owned no.14a. Bob Mills held the lead on the restart and held on the rest of the distance to take his first win of the year. Buck Mills Jr., Jason Rhodes, Dominik Albanese, and Frank Mills Jr. completed the top five.

Stephen Winsor and Lucas Kastenhuber brought the Open V. Crate Sportsman to the green flag. Jonathan Fowlston quickly jumped out to the race lead but Blake Sarpriacone got around Fowlston to take the race lead. Jeremy Hamilton and Tom Princiotta got by Fowlston for second and third before Fowlston got into the wall on the front-straightway on lap nine. Stephen Winsor had nowhere to go, tagging the front end of Fowlston and spinning sideways. Winsor returned with Fowlston going off on the hook. Sarpriacone took off on the restart and held off Tom Princiotta to take the win. Princiotta, Hamilton, Kastenhuber, and R.J. Budd completed the top five.