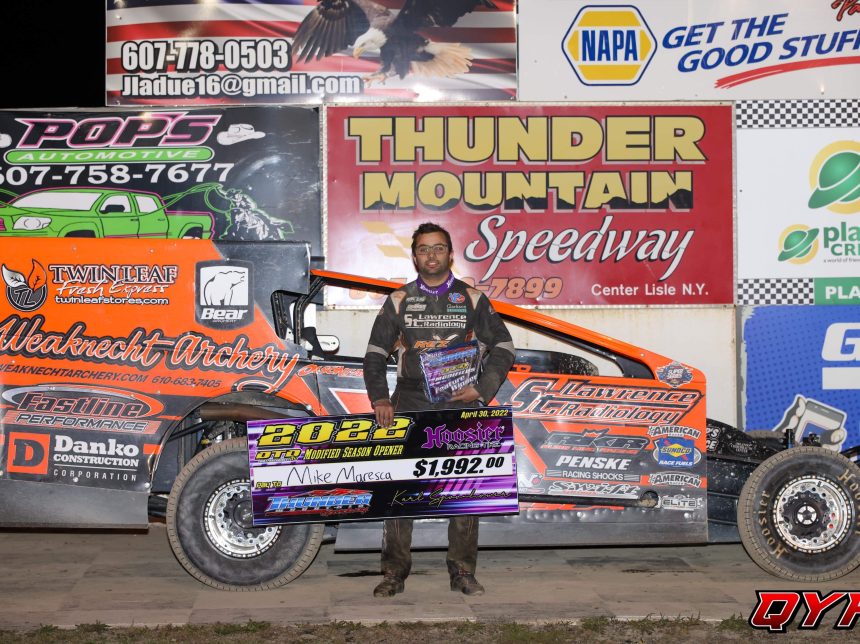 Mike Maresca charged from tenth place to take the first of three Thunder Throwdown Modified races. Maresca invaded the Thunder Mountain Speedway and took home the $1,992 prize. Maresca started tenth and charged his way to fourth, battling Alan Barker, Rusty Smith, and Nick Nye for the race lead. Maresca took the lead from Nye off of a late race restart and held on to take victory. Nye finished second, ahead of ‘Fast’ Matt Meade who stormed to third after starting fourteenth. Alan Barker and Rusty Smith completed the top ten.

Alan Fink led all twenty-five laps of the DIRTcar Sportsman feature to take the win. Jordan Millard started on pole but was passed by Fink and Hunter Lapp, shuffling the McGraw Missile back to third. Lapp tried to put pressure on Fink, but Fink bested the field. Lapp finished second, followed by Millard, Will Shields, and Will Eastman.

Justin LaDue held off a variety of challengers to claim victory in the B-Walt’s Car Care 600cc Modified feature. LaDue battled with Chris Jordan on restart after restart, and despite his best efforts, Jordan could not prevail. Jordan was followed by Tom Donahue, Jake Waibel, and Nolan Smith.

Jonathan Fowlston held off Trey Palmer in the 15 lap Open V. Crate feature. Palmer led in the early going, but Fowlston passed Palmer a handful of laps in and never looked back. Palmer was followed home by Lucas Kastenhuber, Joe Gorsline, and Stephen Winsor

Thunder Mountain is back in action for a full card of racing next Saturday, May 7th.
THUNDER MOUNTAIN SPEEDWAY: 30TH ANNIVERSARY SEASON OPENER RESULTS