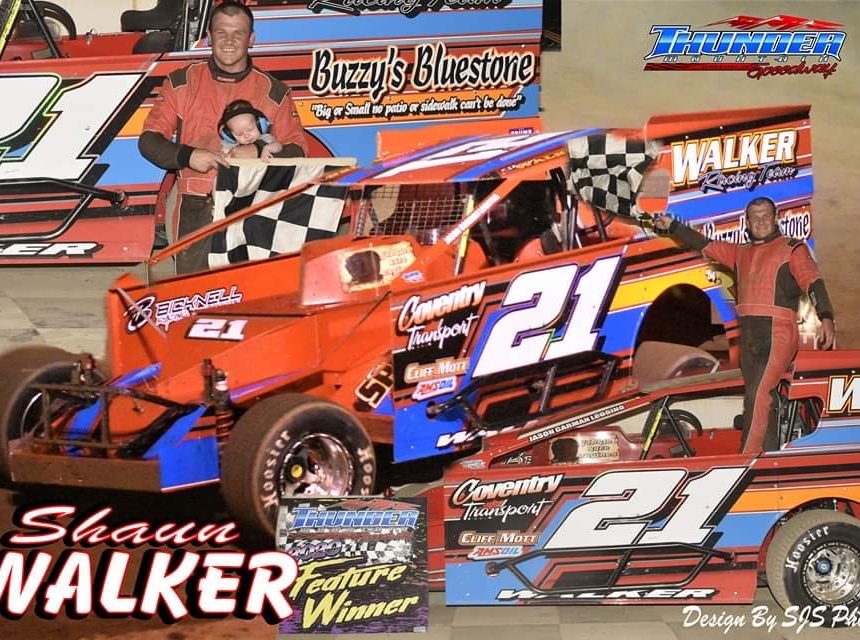 Center Lisle, NY- September is here and the penultimate show for the 2020 season at the Thunder Mountain Speedway is in the books.  Despite a quick visit from Mother Nature, the entire show was completed and has prepared us for a great season finale next week.

​The Open Modifieds put on a great race.  Marc Goodwin and Kenny Hammond filled the early laps with a great battle for the lead.  Goodwin was able to clear Hammond and led the field to the race’s first caution on lap ten.  During that opening run, Shaun Walker worked his way through the field and got to take the restart on the outside of Goodwin.  As the field came off of turn four to complete the first lap off the restart, Goodwin made a mistake and slid out of control.  He made contact with Kenny Hammond before spinning himself around.  This gave the front row to Hammond and Walker for the restart.  The two had a great battle for the lead.  Hammond was able to jump ahead of Walker, but Walker caught him and took the lead back shortly after.  A brief rain delay at halfway gave everyone a chance to breathe and prepare for the second half of the race.  When the track was ready to go, the field returned to the track, but Hammond was no where to be seen.  Walker would have points leader Billy Decker starting behind him for the restart.  Walker and Decker had an incredible battle for the lead from that point on.  Walker was commited to the top side of the track while Decker used the bottom.  Decker made good ground on corner entry and through the center, but the outside momentum on the exit was the determining factor for Walker.  A caution with six laps to go gave Decker one last shot to figure out how to beat Walker.  The two picked up right where they left off, but Walker could not be beaten and took the checkered flag.  Decker finished in second with Brandon Walters, Alan Barker, and Danny Tyler completing the top five.

​The next chapter in the wild points battle for the DIRTcar 358 Modifieds was written with another exciting feature race.  The early battle for the lead was contested by Shayne Spoonhower and Michael Stanton Jr.  A couple cautions put their fight on hold, then it came to end when Stanton’s right front locked up on him on one of the restarts.  Spoonhower held onto the lead, but it wasn’t long before last week’s feature winner Michael Maresca was knocking on his door.  Maresca was able to pass Spoonhower and then checked out from the rest of the field.  While he was leading, a fantastic battle was taking place for third between Spoonhower, Alan Barker, and Rocky Warner.  The three of them put on a great show before Spoonhower made a mistake by catching the back stretch wall and flattening his right front tire.  This drew a caution and evaporated the lead that Maresca had built up.  Maresca wasn’t phased by it and jumped right back out to a healthy lead.  He held his lead the rest of the way and scored his second consecutive victory.  Colton Wilson was the second place finisher, then Rocky Warner crossed the line in third over Ronnie Davis III in fourth and Jordan McCreadie in fifth.  Davis III was the highest finishing driver in the battle for the championship.  Lance Willix finished in eighth, points leader Brandon Walters finished in ninth.

​The DIRTcar Crate Sportsman feature was dominated by Cody Jackson.  Jackson had an early battle with pole sitter Tim Guild.  Despite racing hard for the lead, the two of them were able to open a gap up on the field.  The race’s first caution took that gap away, but it was exactly what Jackson needed to take advantange over Guild.  Guild had the lead for the restart and tried to slide up in front of Jackson in turn one, but Jackson saw it coming and crossed him over in turn two.  He found a lot of speed once he did and rocketed by Guild for the lead.  The race stayed green the rest of the way, allowing Jackson to run away and hide from everyone behind him.  He took the win by a large margin over Brandon Carvey, Mike Button, Tim Guild, and Alan Fink.  Points leader Tommy Collins finished just one spot behind Fink in sixth, so the gap between those two in the standings will shrink by just a few markers going into next week’s finale.

​Wheeler’s Excavating Street Stock feature racing kicked off with Damon Decker and Don Russell slugging it out for the race lead.  Their duel contiued up until Lanson Albanese joined the fun and took it away from both of them.  Shortly after Albanese’s pass, Decker made a mistake getting into turn one and made contact with Russell.  The contact spun Decker around while Russell was able to continue on.  A few more restarts throughout the race challenged Albanese, but he refused to let them hinder his performance.  He kept his machine out in front of the field for the remainder of the race and picked up his third consecutive win.  Don Russell finished in second, points leader Jerry Lobdell Jr. was third, Earl Zimmer came home fourth, and Doug Polhamus claimed the fifth position at the checkered flag.

​Ali Scutt was the early leader of the 600cc Modified feature from the pole position.  The first caution came out on lap seven and Scutt had led them all.  Off the restart, Chad Mason got around Scutt for the lead just before another caution came out and forced another restart.  Mason led a handful of laps before he was challenged by Tom Donahue just beyond the halfway point of the race.  Donahue made a great charge at Mason going into turn three with seven laps to go and wrestled the lead away from him.  Donahue was able to open up a gap once he took control and did not look back from there.  He was the first driver undeath the checkered flag when it flew for his third win of the season.  Chad Mason, Justin LaDue, Ryan Jordan, and Doug Windhausen filled out the top five.

​A new winning streak has begun in the Pop’s Automotive Factory Stocks.  Buck Mills Sr. started in the fifth position for the 15 lap feature and had the race lead by the time the first lap went in the books.  He was slowly escaping the field, but Mike Morse quickly got to second and started to run down Mills after changing his line up.  The gap continued to decrease as the laps clicked off and Morse found himself right on Mills’ back bumper with just a few laps to go.  The two leaders caught lapped traffic, who got into each other and triggered a big crash.  Mills was able to avoid it, but Morse was not as fortunate and suffered signficant damage.  He had to pit to make repairs, eliminating his challenge for the win.  When the race returned to green, it was all Buck Mills Sr. and he won for the second week in a row.  Morse was able to recover from the late race crash to finish in second with Buck Mills Jr., Shane Moshier, and Tim Parker in the remaining top five spots.

​Points leader Jonathan Fowlston was the man to beat all night long in the Rookie Sportsman feature.  He and Josh Allen had a competitive run at the lead in the early going with Fowlston staying out in front of Allen.  As the race progressed, Fowlston found something he really liked in the middle of the track and slowly started to pull away from Allen and everyone else.  The second half of the race went green all the way, which only allowed Fowlston to pull further away from the field.  He stayed flawless at the front and got the win for the second time this season.  Josh Allen was second and James Costlow grabbed third after a great battle with Jared Green throughout the second half of the race.  Green made a mistake late in the race to give that spot up to Costlow and also lost another spot to Jordan Millard, who finished fourth.  Green was able to settle in for a fifth place finish.

​Logan LaDue continued his solo run in the Rookie 600cc Modified division.  He continues to improve every week and did a great job this week keeping up with the back of the 600cc Modified heat race he was in.  He also showed a lot more speed than he has in previous weeks, so the experience in running with the faster cars has been doing him nothing but good things.

​We are now down to our final week of the season.  Track championships will be handed out next Saturday night for all eight divisions to conclude this very unique racing season.  It is shaping up to be another great night of racing with some close points fights to add into the mix. 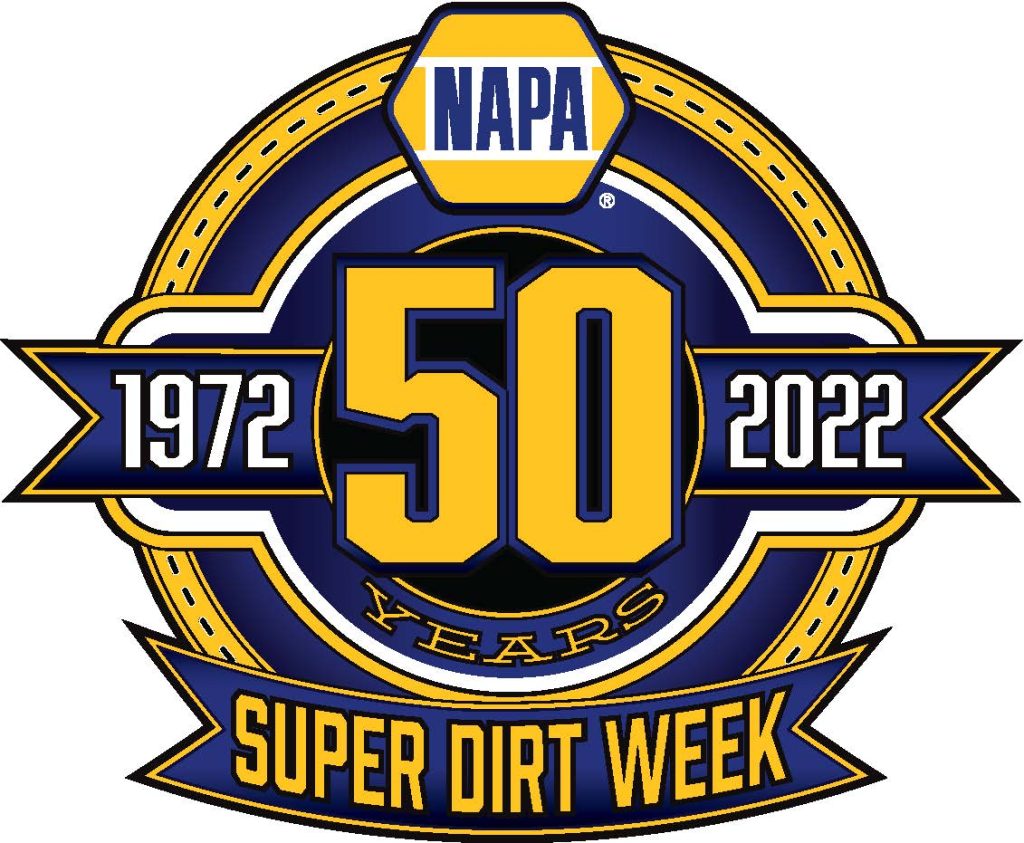