Walker Walks Away with Modified Victory 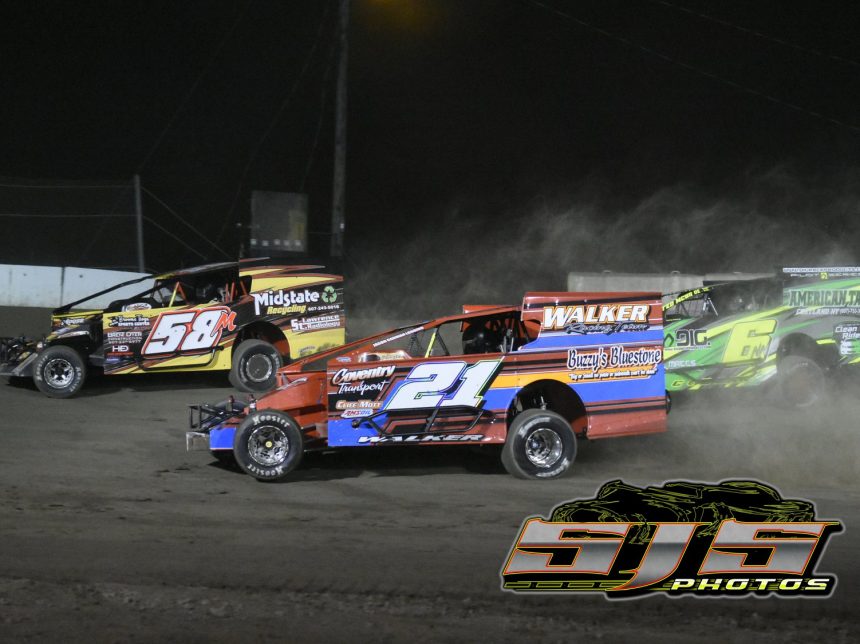 Thunder Mountain Speedway kicked open their gates for an Independence Day jam packed with racing action. The card was full with eight divisions hitting the race track and a fireworks display was thrown into the mix to celebrate the holiday.

The show started with the Rookie 600cc Modified feature. Only three cars participated, but it was a competitive race as all three drivers saw the race lead at one point or another. By the time the checkered flag flew, it was Taylor Wilk leading Logan LaDue and Buck Mills Jr. to make a return trip to Victory Lane.

Mike Morse put up a dominating performance in the Pop’s Automotive Factory Stocks feature event. He wasted little time in getting to the front of the field, but he had to work hard to keep his #21 car out front. Grayson Albanese put up a great challenge for Mike throughout the first half of the race, but Mike proved to be too tough to beat and claimed the victory.

Following the Pop’s Automotive Factory Stocks were the 600cc Modifieds. Chris Jordan started on the pole and took command of the race in the first half. He didn’t go unchallenged as Doug Windhausen was able to figure something out after a red flag just after the halfway point. Windhausen challenged Jordan for the race lead for a few laps before taking it over with about five laps to go. He did not look back after taking over the top spot and cruised to victory.

The DIRTcar Sportsman feature was led early by pole sitter Mike Austin, but he would eventually sacrifice the lead to Will Eastman off of a restart. While Eastman was out front, Alan Fink was slowly working his way through the field from his 12th place starting spot. Fink would eventually take over the lead and appeared to be on his way to an easy victory, but the caution flag flew with just two laps remaining and erased his advantage on the field. Fink was perfect on the final restart and was able to hold off the field behind him to score his second win of the season.

Open Modified feature action took the stage next and they put on a great show. Jimmy Zacharias took the race lead off the start, but would surrender the top spot to Alan Barker on lap four. Points leader Shaun Walker and Billy Decker both started in row six and made quick work of the field in front of them. Walker was able to grab the race lead on lap 11 from Barker with Decker not too far behind. Lapped traffic was a big factor throughout the closing stages of this race, allowing Walker to make the best out of them and run away from the fierce battle for 2nd going on behind him. Barker struggled to get through the traffic, which gave Decker a chance to take the runner-up spot. Shaun Walker would go on to get the win while Alan Barker just barely edged out Billy Decker for the 2nd position. Corey Cormier and Brandon Walters completed the top five.

It was a night of perfection for Jerry Lobdell Jr. in the Wheeler Excavation Street Stocks. After winning his heat race, Jerry was set to start in 8th place for the feature. It took him virtually no time to get to the front of the field and he was untouchable from that point on. He would go on to capture his second consecutive win of the season while Steven Deinhardt held off Damon Decker after the two of them fought very hard in the second half of the race for the 2nd position.

The DIRTcar 358 Modifieds were the penultimate feature of the night and they did not disappoint. Pole sitter Shayne Spoonhower led the race early from the pole, but he had his hands full with Brandon Walters the entire time. Walters looked great on the top side of the track, but struggled to complete the pass due to a fury of caution flag in the early going. Things finally went Walters’ way as he made the pass on Spoonhower and did not look back from that point on. “The Ice Cream Man” went on to claim the victory, his first of the season. Spoonhower finished in 2nd with Tom Eiklor, Corey Cormier, and Dave Marcuccilli rounding out the top five.

The Independence Day show came to a close with a very entertaining Rookie Sportsman feature. Jamie Kamrowski led the entirety of the race, but he had to work hard to keep himself out front. He was challenged early by Bryan Bartos, then had to deal with a late charge from Jonathan Fowlston. Kamrowski held his composure and fended them all off to pick up his second consecutive victory.

Next week’s show on Saturday, July 11th will see all classes return to the speedway with the addition of a Kids Bike Race.