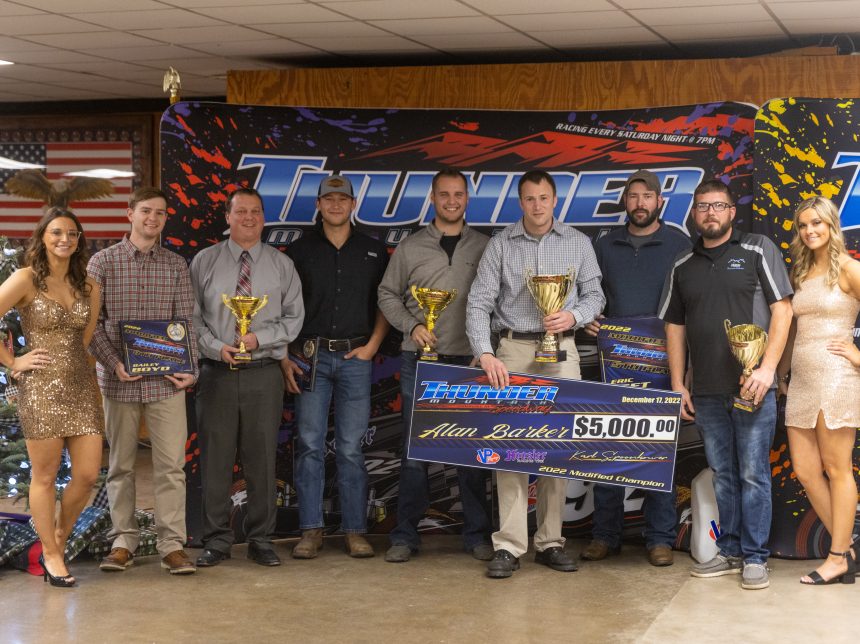 Before we recap the ceremony inside the Marathon Civic Center, Thunder Mountain Speedway would like to take this opportunity to remember one of our own. “Four-Wheeler” Bob Wildoner tragically passed on this weekend. Bob was always ready with a smile in the pit area, and his flags on the backstretch. He was always prepared to step in to offer a helping hand on and off the racetrack. We will all miss him dearly, and we send our deepest condolences and prayers to his family and friends.

Calling hours for Bob will be held January 2nd from 4-6pm at Thomas J. Shea Funeral Home at 137 Robinson Street in Binghamton. A brief memorial service will be held afterwards.

The night started off with some major announcements for the Speedway in 2023. After a discussion with drivers, Thunder Mountain Speedway will be committing to Hoosier racing tires in 2023.

Pop’s Automotive Factory Stocks will receive a boosted purse, racing for $300 to win and $50 to start.

The track will be purchasing new clay from the Syracuse area for a brand-new racing surface in 2023.

Multiple special awards were given out to exemplary drivers and teams at the Speedway.

Dedication to Racing awards were won by Buck Mills Jr., Andy and Terry Cummings, and Jeremy Smith for their determination to race and support of the Thunder Mountain Speedway.

Car Owner of the Year was won by Nick Lapp. Nick is Hunter Lapp’s father and owns the No.60 Hunter wheeled to a championship in 2022.

Points award winners for the 2022 season at Thunder Mountain Speedway are as follows;

Thank you to all of our racers, fans, and supporters who spent their summers on the Mountain in 2022. We look forward to welcoming you back in 2023 for what promises to be an exciting year of racing, family, and friends at Thunder Mountain Speedway.