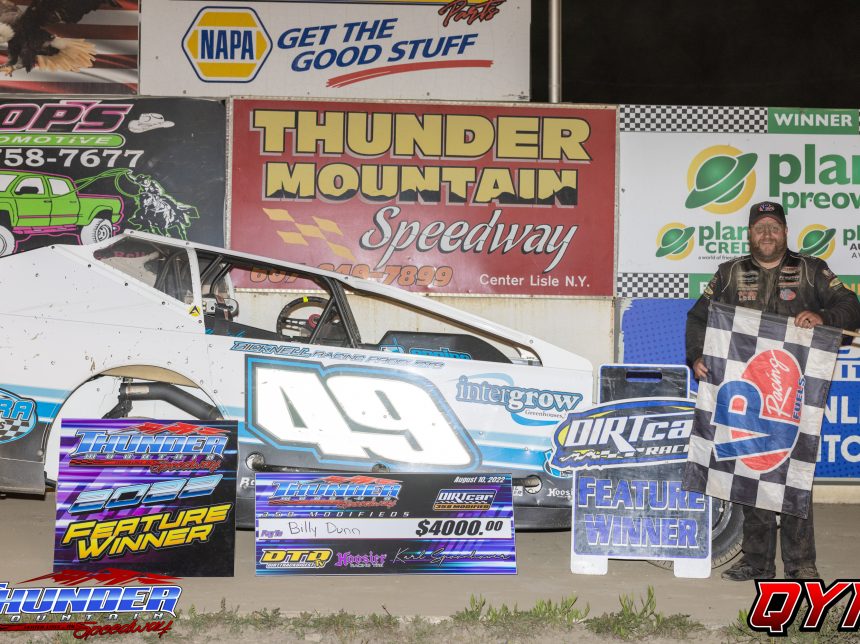 Lisle, NY – It was a beautiful night at the Thunder Mountain Speedway for the DIRTcar 358 Modified Tour to climb up to the clouds. The DIRTcar Sportsman Central Region tour also made the climb up the winding road to the pit area, with the B-Walt’s Car Care 600cc Modifieds adding to a wild Wednesday night card of racing. After a 60-lap brawl in the 358 Modifieds, Billy Dunn bested Darren Smith at the very end to claim his first tour win of 2022 and the $4,000 top prize. Zach Sobotka held off a late charge from Hunter Lapp to claim his first Central Region tour win of the year. Jared Green dominated the B-Walt’s Car Care 600cc Modifieds early, but after mechanical woes sidelined his No.607, Jake Waibel took over control and dominated the second half of the race to claim a $600 payday.

Darren Smith and Billy Dunn led a 31-car DIRTcar 358 Modified Tour field to the green flag. Smith worked to the race lead from the outside with Dunn quickly in tow. Behind them, the battle for third started to heat up between Dave Marcuccilli, Colton Wilson, and Lance Willix. Wilson bested the other two early, but never pulled away. The top five wouldn’t have much time early to race each other, as the yellow flew on lap six for a sideways Ronnie Davis III. A quick restart saw Smith jump back out to the lead over Dunn, while Marcuccilli fought back to third, bringing Willix with him. Colton Wilson stayed close after being shuffled back to fifth. The yellow flew again on lap 13 for Marshall Hurd coming to a stop with a problem in turn four.

The first attempted restart resulted in a melee. Garrett Rushlow ended up sideways in front of the field after light contact and collected a host of cars. Billy VanInwegen, Brock Pinkerous, Doug Smith, Rusty Smith, and Adam Pierson were all collected in the pileup. All but Rushlow were able to drive away. Rushlow needed the hook, while Pierson drove his wounded No.215 off of the turn 1 pit ramp to call it a night.

The second restart saw the top four hold the status quo. The race for fifth continued to heat up, as Jordan McCreadie and Shayne Spoonhower closed in on Wilson. McCreadie got by Wilson to take the spot while Spoonhower couldn’t make a move stick. The yellow came back out on lap 17 for Doug Smith spinning in turn one. Smith called it a night and pulled in soon after.

On the restart, the top five held position while Wilson and Spoonhower battled fiercely for sixth. Dunn started to close in on Darren Smith out front as the run wore on. By lap twenty-four, Dunn was getting alongside Smith, but was unable to clear him. Behind them, Ronnie Davis III was making a big charge through the field. After his spin, Davis worked his way up from the tail to crack the top ten by lap 25. Not long after, the yellow flew as fifth place runner Jordan McCreadie broke in turn two.

The restart saw Marcuccilli and Willix briefly challenge Dunn for second. Dunn seemed vulnerable at first but was able to pull back away from the pair and chase down Smith once more. Spoonhower finally made the move for fifth stick, clearing Wilson on the restart while trying to chase down the leaders. Davis also continued his march to the front, moving into seventh behind Wilson. A yellow flew on lap 33 for Todd Root pulling off the pace. On the restart, the top four pulled far away from Colton Wilson, who got back by Spoonhower to take fifth. Spoonhower was facing more pressure from behind, with Davis and Erick Rudolph breathing down his neck. Spoonhower held the pair off as the yellow flew dramatically on lap 38 for Justin Crisafulli. Crisafulli’s No.11 went up in a plume of smoke, laying fluid down. Fortunately, the fluid ran in very quickly and racing resumed after a handful of pace laps around the speedway.

On the restart, Smith continued to show the way over Dunn and Marcuccilli. Willix threatened to take the three spot, but was unsuccessful. Erick Rudolph had more success, getting by Spoonhower for sixth and challenging Wilson for fifth. The yellow flew on lap 41 for Daryl Mitchell, who ended up sideways in turn two.

The ensuing restart did not last for long. As the field clicked off lap 42, Justin Stone got sideways and was collected by Marshall Hurd and Daryl Mitchell. Mitchell continued, but the night was over for Hurd and Stone.

On the restart, the top five pulled away from the field. Their lead was short lived, as Ronnie Davis III went around again in turn two, ending a phenomenal comeback run for RDIII. Davis called it a night afterwards.

The Davis spin was the final yellow of the night, with the field running the last fourteen laps under green. With six laps to go, Billy Dunn finally closed in enough on Darren Smith to make a move. Dunn took the lead on lap 55, and cleared Smith with a slider on lap 56 to take the lead and the win. Smith, Marcuccilli, Willix, and Rudolph completed the top five.

In the DIRTcar Sportsman Central Region event, it was Zach Sobotka and Hunter Lapp bringing the field to green. The battle for the win centered around Sobotka, Lapp, and Alan Fink. A big stack up on lap two took out Mike Austin and Chris Mackey. The stackup started when Dane Hedlund spun in turns three and four after contact with Andrew Buff and another car. Austin clipped Hedlund hard, while Mackey collected Dana Davis and spun into the implement tires. Austin and Mackey’s evenings ended while the everyone else continued.

Fink took over second from Lapp on the restart. Fink wasn’t able to do much work on chasing down Sobotka though, as the caution flew again on lap 7 after Hedlund and Zach Buff made contact. A frustrated Hedlund saw his night end with Buff also falling out. Another restart saw a few green flag laps until Gordon Smith, Dana Davis, and Ricky Thompson were collected in a big turn one stackup. Davis and Thompson’s nights ended there. From there, the race went green. Lapp got back by Fink on the final restart and had twenty laps to chase Sobotka down. By two to go, Lapp was in striking distance as they cleared a lap car. Lapp wound the car up from the top down to the bottom through three and four on the final lap, but Sobotka was too strong in the end. Fink, Dave Rogers, and Mike Fowler completed the top five. Fowler was particularly impressive, charging from 14th to fifth over the course of the race.

The B-Walt’s Car Care 600cc Modified feature was led to green by Christian Hafl and Chace Scutt. As the field worked to complete lap two, a scary incident took out multiple cars. Hafl got sideways in front of the field after slight contact, and that set off a chain reaction. TJ Smith ended up flying through the air and eventually turning over, getting hit hard while upside down by Chelsie Beebe. All drivers were okay, but less could be said about the cars. Ali Scutt, Tom Donahue, and PJ Goodwin saw their nights end in the incident.

On the restart, Jared Green took advantage and catapulted into the race lead. Green moved up to second after starting fourth. Green seemed set to sail away out front while everyone else battled for second. Jake Waibel got around Chace Scutt to claim the two-spot. However, that battle quickly became for the lead at halfway, as Green’s car broke from the lead. Green tried to pull down into the infield, but couldn’t get far enough in to race safely, bringing out a caution. On the restart, Waibel pulled away from the field and sailed to a $600 payday. Scutt was second, followed by Doug Windhausen. Windhausen was impressive all night long. Windhausen charged from the 12th place starting spot to third, picking cars off left and right with tactical precision. Justin LaDue was fourth after starting eighth. Hafl rebounded from the lap two melee to take fifth.

The next event for the Thunder Mountain Speedway is on this Saturday, August 13th. The Dirt Track Digest TV Modifieds and DIRTcar 358 Modifieds highlight the card, with Kids Power Wheels races adding some fun for the kids. Power Wheels must be pre-registered at the Sugar Shack, with races taking place after hot laps. Kids 9 and under get in free, so bring the kids and their power wheels to the track to join the racing card! Hot laps are at 6:00pm with racing to follow.