Another win for the Mountain against old Mother Nature! 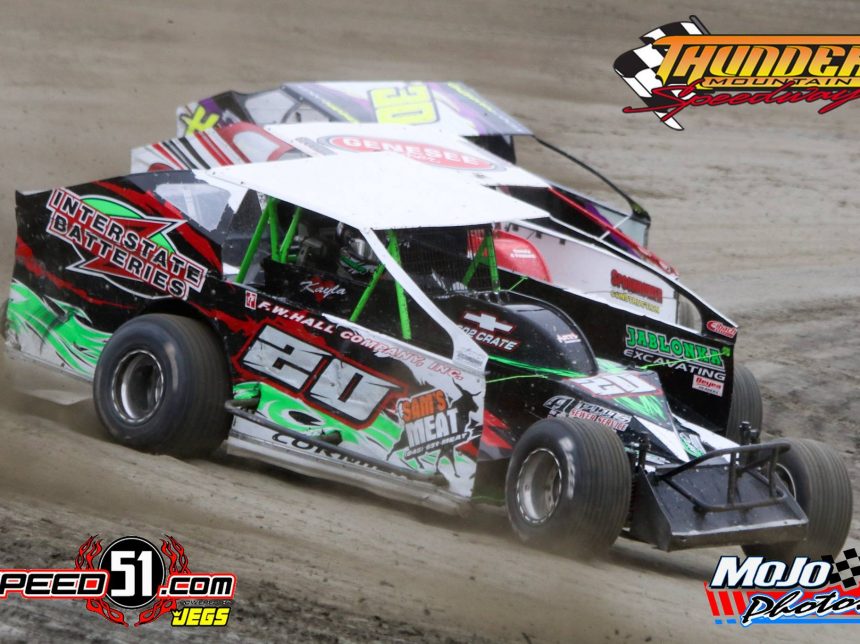 With over 4 inches of rain falling on speedway grounds Friday night the Thunder Mountain Speedway track crew worked overtime all day Saturday to put on an amazing event Saturday night. With overcast skies and abysmal race weather Thunder Mountain Speedway rallied for an astounding season-high 162 cars through the pit area gates providing the fans with an amazing night of racing. There was a lot of extra money on the line through two series events Saturday night and we saw last-lap passes, late-race charges and multiple three wide battles all night long in the main events.

The excel north region was in town for the 600cc mods. With a 24 car starting field there was plenty of action all over the fast track. It appeared to be another Worthing show aboard the potent Chris & Becky Kithcart entry as we were only five laps into the feature and Worthing already had a sizeable lead. When the caution came out for a spinner in turn one. Worthing had a right rear go flat and as per excel rules you cannot go in the pit area and return to racing so that ended his night early. That put Joe McCabe on the point where McCabe would lead a good portion of the show until the high flying Tyler Bartick appeared. Bartick picked up the series win and was pretty pumped in victory lane. The young driver said “man I love this place you can race anywhere you want. There’s so many lanes around here and this is my first win since the tour race back here in 2011 it’s been a long six years.”

In the ever-popular street stocks we saw the patriot, Matt Spencer, finally shake the monkey off his back. He parked that beautiful patriotic Avery Auto Center number 9 in Thunder Mountain Speedway Victory Lane. On lap 7 Spencer was able to battle the race lead away from good buddy Jake Falston. From there Spencer drove to a strait away lead that he would never relinquish. Through the races midpoint he was challenged by Mike Wilbur. On this night, Matt Spencer was up to all challenges he had the car to beat and was hitting on all 8 cylinders.

With the IMCA Empire series being in town we saw a great battle for the races big $750 payday. One could say that it was a big win for one of the little guys. Tyler Stoddard recorded his first Thunder Mountain Speedway victory of the year and a great night to do it. The second-generation young racer topped a great field for the win that was very popular with the crowd and an emotional victory lane for the young man. His father and crew all joined him in the laurels of victory.

The modifieds were a heartbreaker and a picture perfect pass all-in-one race. Cory Costa put on his best performance to date at the Lisle, New York speed plant but ended with a second place run under the checkers. Costa quickly got out front where he had a half a track lead for the majority of the event. When the yellow flag flew on lap 18 it put Wurtsboro, New York hot shoe Dan Creeden on his back bumper and Jeremy Smith in tow. They appeared to be two of the fastest cars on the racetrack prior to the caution. On the ensuing restart, Costa executed a perfect start. He easily pulled away to a half a lead. With laps clicking off and time starting to expire Costa caught the back of the field. Lap traffic, always the great racing equalizer, played the deciding factor. Costa tried to go low under a lap car on the white flag in the entry of one and Creeden saw his moment and seized the opportunity. He put his right rear American Racer against the cushion on entry of turn one. Then the duo roared down the back stretch with Costa on the bottom the lap car in the middle and Creeden all the way to the wall. Both cars went barreling down into the backstretch when they hit turn 3 Creeden had a wheel ahead. Although Creeden slid high off 4 and narrowly nipped Costa at the line. Costa has ran into adversity throughout the season but has definitely picked up the pace in the last several weeks. He looked to be on his way to his first victory of the year only to have it derailed by Creeden during last lap outside pass. Several emotions through the last lap of the modified feature the agony of defeat and the laurels of victory. It was a true heart breaker for Costa yet you had to commend the flawless move of Creeden. Dan spoke about it in victory lane “you know I needed a dozen laps or so to get going and he was really flying around here I seen the lap car start to pinch him off down in one I had to blast it around the top that’s just what you do when you’re in second like that. Thankful it stuck I mean look at this place there’s racing from the uke tires to the fence I can’t say enough about Karl and his whole crew here at Thunder they give us the best stage to perform on. I’ve been there where Cory is right now and it just sucks I’m thankful to come outta here with a win tonight.”

The crate sportsman put on another thrilling show. The 26 car starting field took a few cautions to get rolling but once it did oh man was the racing furious. Cory Corimer has been as consistent as anyone in the crates but just hasn’t found the way to victory lane. Well that all changed Saturday night. With his father Derrick’s lead interstate batteries 20 team they were definitely at full charge Saturday night. Cory broke into second on lap 5 and set his sights on the torrid pace being set by Shayne Spoonhower out front. Cory worked over the young driver known as Shayne Dog for a handful of laps before deciding to hook up the positive cables on the interstate batteries ride and go to the top side. Once he did that he was sailing around the racy 3/8 clay. Cormier jumped out to a half a track lead, something he would never relinquish. The battles behind him where fierce. With Spoonhower all by himself in second the Jrs. were putting on a show for the ages. Mike Nagel Jr. and Tom Collins Jr. were locked in a side by side battle for over 15 laps. In an earlier accident Collins’ left side door and quarter panel was virtually ripped off the car. While they were busy racing each other side by side without a spark flying veteran racer Pat Jordan was on mission coming through the field after fading early in the feature his 25 car was coming alive. Nagel and Collins were battling and Jordan slid right underneath the pair with two to go. When the checkers fell it was a big win for Cormier followed across the line by 19 yr old Spoonhower then Jordan, Nagel and Collins.

The White show continued in the opens but this one was bitter sweet for the younger White. Although Brian blasted around the outside of race long leader Billy Spoonhower who had a right rear tire fading with three to go. Whites motor let loose coming off four. Sure, he was happy to be getting his pictures taken in victory lane but the look on his face and the puddle of oil under the car said it all.

Other winners on the night were AJ Williams in rookies Peter Dance in the Empire lighting sprints and Mike Koser from Troy, PA. made the long haul to be victorious in the 4cyl stocks.

The date is rapidly approaching for the biggest weekend of Thunder Mountain schedule. Saturday night July 22nd features Open Sportsman, Crate Sportsman, Street Stocks, 600 Xcels, 4Cyl. Stock, IMCA Modifieds, and Rookie Sportsman.  We will hold open practice for the Modifieds along with a 15 lap dash for cash paying the winner at least $500 and a guaranteed starting spot in Sundays big show! Free camping and entertainment Saturday night. Then right back at the fast track for the huge 5th edition of the MJH Oilfield Wade Decker Memorial Show! $5,000 to win for the Modifieds (with gamblers fee), $1,250 for the Sportsman, $1,000 for the Street Stocks and $400 for the Xcel 600cc mods! Folks when we say you’re going to want get there early on Sunday were letting you know the seats are going to fill up fast. There’s plenty to do and see with autograph session of your favorite drivers to kids coloring contests, balloon launches and much more. We are looking forward to seeing you this weekend for the granddaddy of them all!