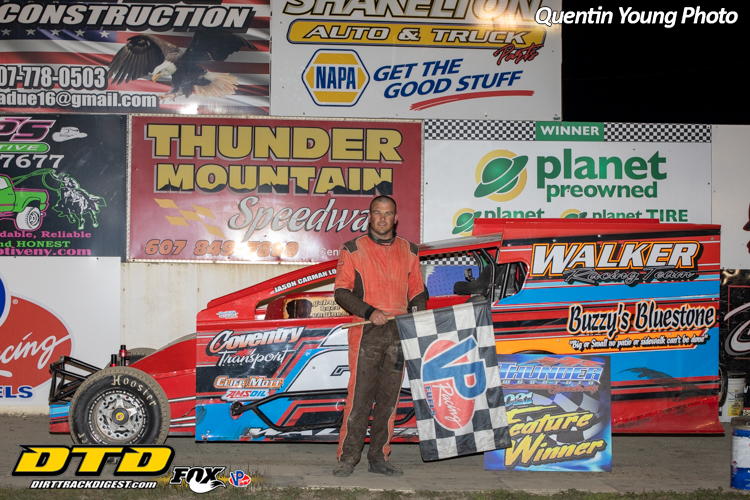 On a wild night of racing at Thunder Mountain, Shaun Walker took a pivotal win to aid his bid for the 2021 Thunder Mountain Modified points championship. Matt Meade took his first win of 2021 in an equally wild DIRTCar 358 Modified race.

Jimmy Zacharias and Eric Leet traded the first and second place spots all race in the Modified feature. Zacharias started on the pole and had successfully fended off Leet until the closing stages of the race. It was then that contact was made between the two drivers after Zacharias and Leet entered turn one with a handful of laps to go. The drivers got hooked together, sending them both spinning and giving the lead to Darren Smith. Smith tried to hold off Shawn Walker, but he could not quite do it as Walker got around Smith to take the win. The win helped to extend Walker’s points lead.
“Tonight, we got some luck to go our way”, said Walker. “I have to thank everyone who helps out.”

In the 358-Modified feature, it was all Tom Eiklor until late in the race. A late race restart removed a challenger in Jordan McCreadie after he broke under a yellow flag. Shayne Spoonhower and Eiklor battled for the lead, but on yet another restart, Matt Meade was able to get a good start. He worked by Spoonhower and then Eiklor and took a commanding lead at the end for his first 358 win of 2021.
“We had a good car tonight; I have to thank my family and the crew. They’ve done so much for me.”, said Meade.

In the DIRTCar Sportsman, it was all Alan Fink. Fink started in eighth but quickly sliced and diced through the field, passing fellow Brewerton Speedway regular Brandon Carvey to take the lead for good in the middle portions of the race. An intense battle raged in the midpack for third, fourth, and fifth with Will Eastman, Hunter Lapp, and Brian White prevailing after race long battles with Jordan Millard and Mike Austin.
“We won on opening night and did everything but win in the meantime; I’m happy to be back.”, said Fink.

In the 600cc Modified division, a scary accident marred the start. Justin LaDue and Devon Green ended up parked sideways in front of the field and created a massive multi-car incident with Chris Jordan and Jason Rhodes getting upside down in the melee. All drivers were okay, and many were able to return albeit with damage. Following a few more minor incidents, Jake Waibel and Chad Mason went on a race-long battle for the ages. The two traded slide jobs and crossovers until Waibel broke in turn four. Mason would outpace new challenger Bumps Scutt to take the checkered flag.
“This is my first ever win, we’ve been racing for three years. It’s awesome”, said Mason.
The Wheeler’s Excavating Street Stocks have been dominated by Steven Deinhardt and Damon Decker, but Shane Wolff Jr. has made a strong case to add his name to the list of dominant full-fendered warriors on the Mountain. Wolff Jr. got the lead from Don Russell early and went unchallenged by Deinhardt or Decker to take the win.
“We have a really good car, George Miller Jr and everyone who put this car together did a great job.”, said Wolff Jr.

The Pop’s Automotive Factory Stock division added to the chaos of the night. Buck Mills Sr. and Mike Morse had a race long battle that came to an end when Morse blew a right rear with 6 laps to go. It was a race of calamity, with Josh Towner and Buck Mills Jr. looking competitive until mechanical woes sidelined both. Mills Sr. drove away from the field and did enough to keep Morse at bay as he charged back up to second to take the win.
“I assumed Mike [Morse] cut a tire down when I saw him disappear. This car we have is phenomenal.”, said Mills Sr. in victory lane.

The Budget Sportsman featured our second first-time winner of the night. Ethan Decker led from the drop of the green to the checkered despite on or two cautions slowing the pass. Eric Winsor tried to chase Decker down, but Decker went wire-to-wire in comfortable fashion.

“It feels good to finally get here, I have to thank everyone who helps.”, said Decker.

Liam Zacharias took another Jr. Slingshot win to tighten his points race up with Evan O’Hara. Zacharias passed O’Hara and his brother/teammate Dominic Kirchberger en route to the victory in a race that went wire to wire.
“Thank you to my dad and family for helping me”, said Zacharias.

Next week is a regular racing program on the Mountain.