BARKER WINS SECOND OF THE YEAR AT THUNDER MOUNTAIN 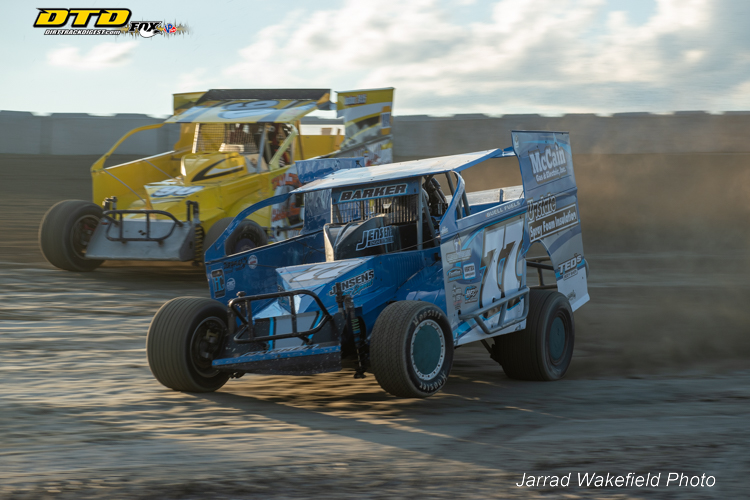 CENTER LISLE, NY…..Alan Barker, Mike Morse, Lanson Albanese, Evan O’Hara, Logan LaDue, and Johathan Fowlston were repeat winners in Saturday night’s action at Thunder Mountain Speedway, with TJ Smith continuing a streak of new winners in the 600cc Modifieds, Tom Eiklor getting his first in the DIRTcar 358 Modifieds, and Todd Hayward grabbing his first win of the year in the DIRTcar Crate Sportsman.

The 35-lap Modified feature saw Landon Cummings grab the lead, but surrender it to Alan Barker just a few laps in. Barker motored away from Cummings as the pair worked through lapped traffic, leaving a battle for third behind them with Chris Jordan, Shaun Walker, and Kenny Hammond all fighting it out. Barker cruised home to his second win of the year, with Cummings all alone in second. On the final lap, Walker snuck past Chris Jordan to take third, while Hammond rounded out the top five.

Tom Eiklor started up front in the 30-lap DIRTcar 358 Modified contest, and while he was never passed for the lead in the event, he had his hands full on a late race restart that put Colton Wilson and Rusty Smith on his back bumper after a jingle that involved Billy Dunn, Kyle Weeks, and Shayne Spoonhower. Eiklor held off Wilson over the final seven laps to take his first of the year in the division, with Rusty Smith, Jordan McCreadie, and Willy Decker taking the remaining top five spots.

In the 25-lap DIRTcar Crate Sportsman main, Todd Hayward broke out into the lead from the front row and had Jake Mason chasing after him. Jamie Kamrowski was being challenged by Kinser Hill, Rich Talada, and others in the late stages of the event, with Alan Fink also moving into a battle for the rest of the top five spots. In the final couple of laps, Mason got within a car length or two of Hayward, but Todd held firm to get his first win of the year by a car length at the finish. Kamrowski maintained third, followed by Hill and Fink in a caution-free event.

The 600cc Modified event saw TJ Smith grab the lead from Chad Mason on lap 5 and he was challenged severely over the second half of the race by Chris Jordan and Brenton Miller, who had charged from 13th starting position. Justin LaDue and Tyler Smith caught the leaders and the five battled intensely over the remaining laps, with Smith outgunning Jordan for his first win of the year. Jordan, Miller, LaDue, and Tyler Smith crossing the line behind the winner.

Lanson Albanese made the winning move to pass Tommy Paige for the lead on lap 4 of the 20-lap Wheeler Excavating Street Stock feature to take his second win of the year, with Steven Dinehardt just a couple of car lengths back in second spot. Early leader Paige held off Mike Wilbur for third with Damon Decker taking fifth.

Jason Rhodes appeared to have the 15-lap Pop’s Automotive Factory Stock feature well in hand, leading from the start till his car had an issue coming down to the white flag. Mike Morse was in the right place at the right time, taking over the lead and holding off a determined Josh Towner for his fourth win of the season. The rest of the top five spots were taken by Shawn Sabo, Buck Mills Sr, and Shane Moshier.

Johnathan Fowlson made his way from the 4th starting spot to the lead on lap 5 of the Gary’s U-Pull-It Budget Sportsman main event and pulled away for a straightaway advantage at the finish, taking his third win of 2021. Jeremy Hamilton made some late race moves to take second, followed by Steve Schrader and Ethan Decker.

Logan LaDue took his second win of the year in the Junior 600cc Modifieds, while Evan O’Hara added another Junior Slingshot feature win to his total for the season.

Tuesday night, June 15th, is the first midweek special event at Thunder Mountain, sponsored by Snake Creek Marine, as the Modifieds compete in the “Mr. Ford” Mike Colsten Memorial, a 51-lap feature event paying $5,100 to the winner. The DIRTcar Crate Sportsman and Budget Sportsman will also be in action. For more information, visit www.thundermtnspeedway.net .